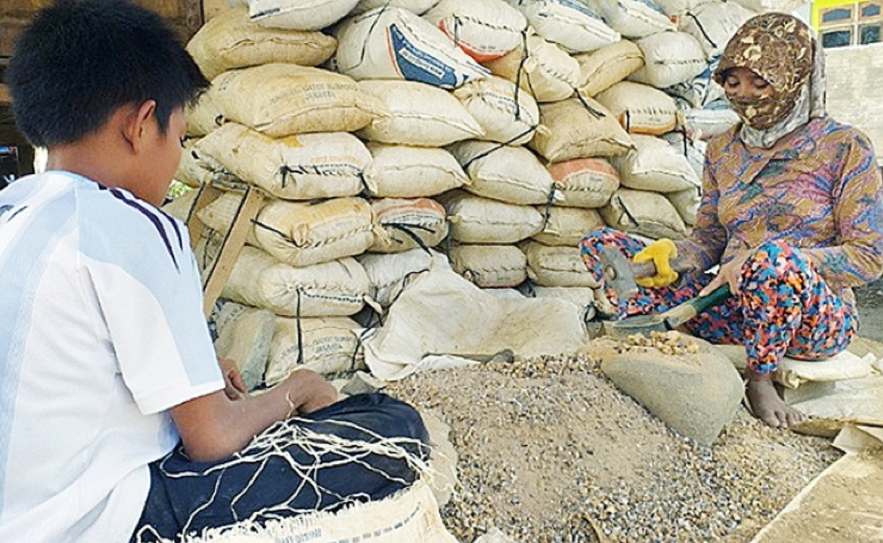 Small-scale gold mining has caused concerns in West Sumbawa regency, West Nusa Tenggara (NTB), due to the massive use of mercury and cyanide, which can cause health and environmental problems.

Limited job opportunities and lower income from farming have caused residents to turn to illegal mining.

“I have been working like this since 2014, since the gold mine has been here,” said Sahnip, 42, a resident of Lamunga Atas in Kayu Putih village, as she crushed rocks into smaller pieces using a hammer of some 5 kilograms in weight.

More than 50 women like Sahnip count on rock crushing for their livelihoods because the village’s rain-fed rice fields are underproduce, especially during the dry season. As farmers, they can only earn Rp 75,000 every day, about half of what they get from rock crushing.

The gold-encrusted rocks are taken from a mine located in the Lamunga hills, several kilometers from Kayu Putih. After crushing, the rocks are sent several kilometers away for refining, using machines locally known as gelondongan. Mercury is required to operate the machines and to produce the refined gold.

The owner of the refining machines in Lamunga Atas, Hamdi, operates six mines in the area. He said he started his business in 2014.

In total, he said, a mine needed between Rp 100 million and Rp 200 million to operate, including for transportation and mercury purchase. He gave his dozens of miners and technicians Rp 8 million to Rp 10 million per week for logistics at the mining hole.

“If we’re lucky, we can earn four times as much [in revenue],” said Hamdi, adding that one sack of rocks could yield between 1 and 50 grams.

The mines that he operates are in the concession area of the Indotan Group.

The village was among the worst-hit areas in West Sumbawa during powerful earthquakes in August 2018 that devastated the province. Most of the 280 houses in the village were damaged. Tens of them even collapsed to the ground.

However, residents rebuilt their houses on their own, even before the central government distributed Rp 50 million in assistance for each family affected by the disaster. “It’s because of the gold money from the Lamunga mines,” said Muhammad Tador, 38, also a small-scale mining operator.

The Jakarta Post visited Lamunga Atas village in December, while also witnessing a raid on another unlicensed mining operation in Puna Tongo Loka hills in Tatar village, which is in the concession area of PT Amman Mineral Nusa Tenggara (AMNT).

The local police and military have formed a special task force to crack down on illegal mining practices, but such practices cover large areas of the regency.

The mining site in Lamunga Atas is just one of many other illegal gold mines in West Sumbawa. A local environmental group, Barisan Muda Membangun (Barma), recorded at least six unlicensed mining sites in the regency.

Barma head Fauzan Azima said the environmental damage caused by the activities was “enormous”, not to mention the danger of using mercury and cyanide in the gold purification process.

He said currently there were at least 6,019 gelondongan machines operating in 25 villages in several districts in the regency. If every 12 machines requires 1 kg of mercury a day, the use of the dangerous agent reaches 502 kg every day in the regency.

The purification process also uses tong, equipment used to process the mud resulting from the gelondongan using cyanide and carbon.

“What is concerning, gelondongan and tong are openly operated near housing areas, rivers and agricultural irrigation facilities” Fauzan said.

The impacts of mercury pollution on human health was shown in a research study and survey conducted by environmental research group Nexus3 Foundation. The group, along with AMNT and Mataram University, conducted the study on the impacts of small-scale mining in NTB.

“The impacts now can also be seen in many babies born with disabilities. And those born without disabilities do not grow healthily,” Yuyun said.

She added that there were around 800 illegal mining sites spread across 93 regencies in 32 provinces across Indonesia. “They produce up to 100 tons of gold a year, but the mercury use is hazardous not only for the environment but also for residents’ health.”

West Sumbawa Legislative Council Speaker Kaharuddin said considering residents’ dependence on gold mining, the administration was planning to issue a people’s mining license as a solution, for areas outside the existing concessions.

The plan is still disputed by residents and small-scale mining operators, since they say the proposed sites are not as productive their current operations.

“This is what the people cannot yet accept,” said Kaharuddin.

He said if people could agree on the sites, proper mining management could be implemented to reduce the hazardous impacts of the current illegal mining activities.