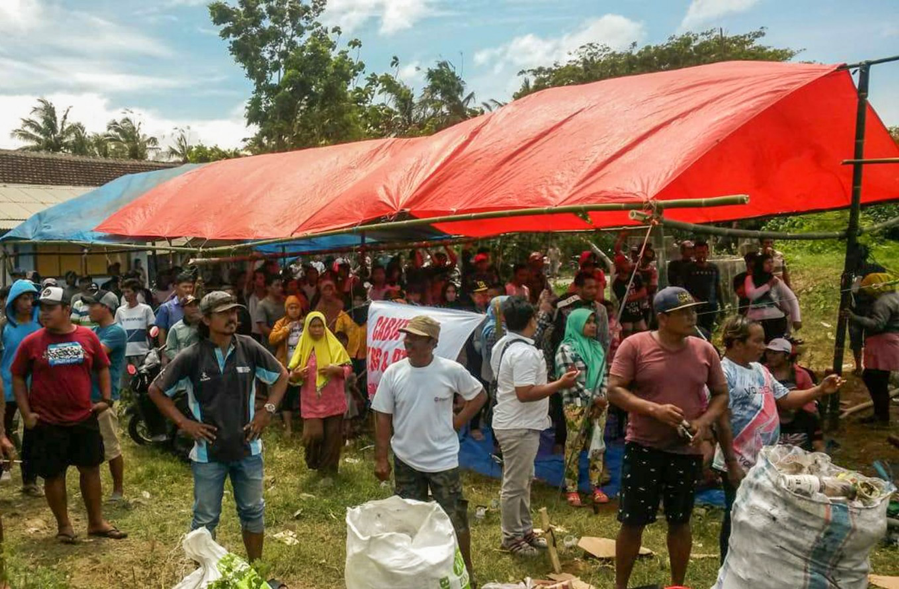 Dozens of residents of Sumberagung village in Pesanggaran district, Banyuwangi regency, East Java, have occupied nearby Mount Salakan for nearly a week to protect it from gold mining activities as part of protests that activists said resulted in a clash with the police over the weekend.

The police, however, have denied the activists' claim.

The residents blocked researchers from mining company Bumi Suksesindo (BSI), a subsidiary of publicly listed company Merdeka Copper Gold, from accessing the mountain on Saturday. The residents said they rejected a plan to evaluate the mineral content of Mount Salakan because they had suffered from adverse ecological effects of a gold mine operated by the same company on nearby Mount Tumpang Pitu.

The company has rejected the residents' claim, saying that it "carries out its operations based on national government standards".

Sumberagung village is located at around the midway point between the Salakan and Tumpang Pitu mountain ranges.

Tumpang Pitu, located in Sumberagung, is considered to be the second-largest gold and copper reserve in the country, after the Grasberg mine in Papua operated by Freeport Indonesia.

"The residents started to resist on Thursday by putting up tents not far from the Brimob tent and keeping watch there until night time," Indonesian Forum for the Environment (Walhi) East Java executive director Trijambore Chistanto told The Jakarta Post on Tuesday. "It built up to a peak on Saturday when a clash took place, injuring two women residents."

A video of the clash posted by the Network for Mining Advocacy (Jatam) on Twitter on Saturday shows a shoving match between police officers and residents.

"The women of Sumberagung village blocked [the researchers and the police]. The officers hit the women. As of now, there are two victims (women)," Jatam tweeted. "The two women are identified by the initials F and S. F was hit in the chest and has been taken to Sumberagung Hospital. S was pushed by police until she fell and hit her head on a rock and fainted. She has now regained consciousness."

However, Banyuwangi Police chief Sr. Comr. Arman Asmara Syarifudin denied that a clash had occurred and claimed that the two women only fainted because of exhaustion.

BSI corroborated the police’s claim, saying that the video posted by Jatam actually showed the police trying to prevent a clash between pro-mining and anti-mining groups.

Trijambore said Walhi East Java would support the residents in their efforts to fight for their rights, which they felt were being infringed upon by the mining activities near their village.

Dozens remained in their makeshift tents on Mount Salakan on Tuesday after staying there for nearly a week since Thursday. They took turns guarding the mountain with logistics prepared independently.

Residents, he said, were particularly concerned about how the mining would affect the area's disaster readiness.

According to the National Disaster Mitigation Agency (BNPB), Pesanggaran district, which borders the Indian Ocean, is vulnerable to tsunamis. In 1994, an earthquake and tsunami hit the area, resulting in over 200 deaths.

"Tumpang Pitu has been flattened by mining and if Salakan becomes the location of a mine as well, where will people run to save themselves?" Trijambore said.

"We believe that there is a misunderstanding in the residents’ response to soil resistivity exploration in the Salakan mountain region," Mufizar said. "The soil resistivity activity is part of early research into an area to find out the potential amount of mineral content there."

He added that the BSI's activities in the area were in line with the mining operation and forest area utilization permits that had been issued to the company.

"We will continue to conduct the soil resistivity survey as planned. We respect residents' right to express their demands peacefully and we hope that the residents respect PT BSI's right to carry out the survey," he said.

Merdeka Copper Gold and its main shareholder Saratoga Investama Sedaya have several politically connected people on their board of commissioners.

According to the firm's website, its board of commissioners includes Garibaldi Thohir, the elder brother of State-Owned Enterprises Minister Erick Thohir, as well as Deputy Defense Minister Sakti Wahyu Trenggono and Deputy Foreign Minister Mahendra Siregar.

Demonstrations against the mining activity on Mount Tumpang Pitu have resulted in a number of legal charges against protesters over the years.

In November 2015, eight residents were named suspects for allegedly damaging the company’s property. Four of them were found innocent, while the others are still appealing the case at the Supreme Court.

Environmentalist Heri Budiawan, popularly known as Budi Pego, was accused of displaying the communist hammer-and-sickle symbol on a banner during a rally in 2017. He was sentenced to 10 months in jail, which was subsequently raised to four years’ imprisonment by the Supreme Court in 2018.

According to Jatam, there were 71 conflicts related to mining operations across the country between 2014 and 2019, 12 cases of shootings by security forces and 36 cases of criminal charges against 205 activists and residents who protested against mining operations.