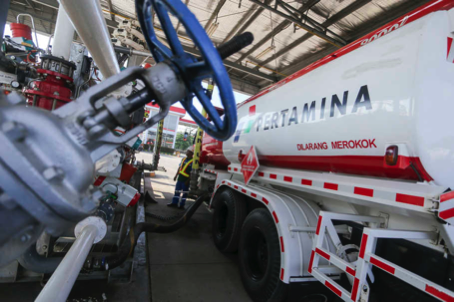 Pertamina is expected to post its lowest first-half profit in four years for 2018, an official said, with the state energy company squeezed by government fuel polices, higher oil prices and a 9 percent slide in the rupiah.

Net profit at Pertamina is expected to come in at less than Rp 5 trillion ($336 million) in the first six months of 2018, Deputy State-Owned Enterprises Minister Fajar Harry Sampurno told reporters at the House of Representatives in Jakarta.

The forecast was a result of oil prices climbing while Pertamina's "downstream compensation was insufficient," he said.

The government, which sets the levels at which the company can sell oil products, has sought to shield the public from rising prices, promising not to raise some consumer fuel prices ahead of elections due in 2019.

But the policy has dented Pertamina's finances and cut its means of spending on much-needed infrastructure.

Pertamina's full-year profits have not been below $10 billion since at least 2005.

The company's previous chief executive was removed in April after repeated clashes with the government over fuel price controls that were estimated to have cost the company more than $1.4 billion last year.

To ease pressure on the rupiah, which slipped to its lowest since 1998 this week, the government of President Joko "Jokowi" Widodo has also asked Pertamina to rein in capital goods imports for infrastructure projects.

"All projects that have not reached financial close will be delayed," Fajar said, referring to his office's latest "guidance" on Pertamina's spending plans.

Pertamina finance director Arief Budiman said the company was revising its 2018 profit target, as well as its work plans and budget.

"It will likely decline," Arief said, referring to Pertamina's 2018 profit target revision, but not giving a figure.

The company's work plans and budget usually include operating expenditure but can also include capital spending plans.

While higher oil prices have yielded Pertamina better returns from its oil and gas output, they have also increased Indonesia's fuel bill, as a net oil importer, especially with the rupiah slumping.