Mining, Plantations Suspected to Cause Floods 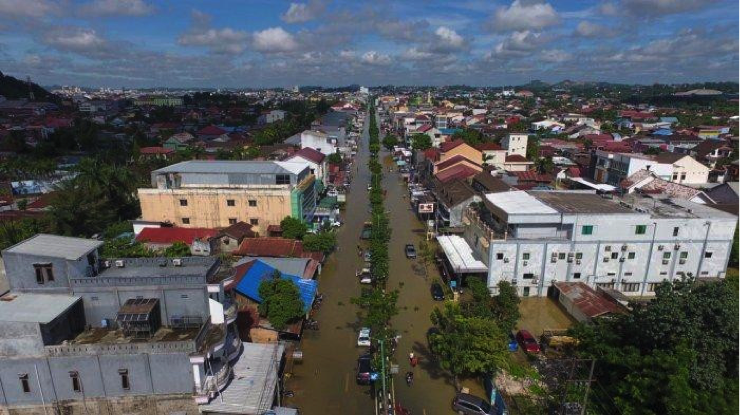 The number of displaced people has increased significantly from 4,198 people on Sunday evening.

Sutopo said the massive flooding was caused after the Lalindu River, Walasolo River and Landawe River in the regency overflowed following heavy rain in the regency from June 1 to 2.

The flood has damaged more than 1,500 houses and public facilities such as bridges, roads, houses of worship and health facilities.
The head of the Southeast Sulawesi chapter of the Indonesian Forum for the Environment (Walhi), Saharudin, said the worst flooding had happened in the mining and plantation cluster in Southeast Konawe.

“Konawe and North Konawe are two of many regencies that have been crowded with oil palm plantations and mining,” Saharudin told The Jakarta Post.

“This land use change for mining and plantations is the major cause of the flooding in North Konawe and Konawe,” Saharudin added.

A resident of Bahodopi subdistrict, Morowali regency, Central Sulawesi, Bachtiar, was killed while trying to cross a river on Monday. His body still had not been found as of Wednesday.

“This time the flooding is really horrifying not only because of the powerful current, but because the flood brought massive wood and thick mud with it,” said Wazir Muhaimin, one of the residents of Bahodopi.

Wazir said flooding in Morowali happened after heavy rain hit the area since the last week of July.

He said the situation might have been worse this year because the forest had been cut down to open many nickel mining clusters in upstream areas.

Wazir said for Morowali residents, rain used to be seen as a blessing from above, children would play outside on the streets when the rain came, but nowadays they see it as the start of a disaster because the forests have been exploited.

“The mining company must take responsibility for the suffering that has befallen the people of Bahodopi due to this flood,” he said.
The flood did not only damage hundreds of houses but also destroyed four main bridges that connected Southeast and Central Sulawesi. The disaster has isolated around 32,000 foreign and local workers of PT Indonesia Morowali Industrial Park, one of the largest nickel mining companies in Morowali, in Bahodopi subdistrict.

In Samarinda, East Kalimantan, flooding has also surrounded the city, which is known as a coal mining hub.

The East Kalimantan chapter of the Mining Advocacy Network (Jatam) blamed coal mining activities for the floods, since the mining sites have taken up 71 percent of the land in Samarinda.

Jatam member Pradarma Rupang said that according to the Samarinda Disaster Mitigation Agency, in 2016 there were at least 450 hectares of flood-prone areas in Samarinda. “Clearly the area has widened now,” he said.

The Meteorology, Climatology and Geophysics Agency (BMKG) has warned of the potential for heavy rainfall in Sumatra, Kalimantan, Sulawesi, Maluku and Papua between June 11 and 15.

In Padang Pariaman regency, West Sumatra, one resident was reportedly killed and one injured on Tuesday afternoon after a landslide hit their house.