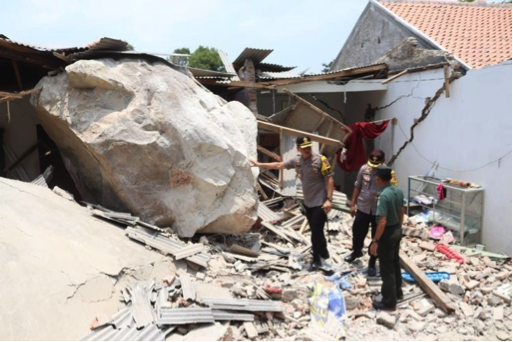 Lawmaker and former Purwakarta regent Dedi Mulyadi has called on the Purwakarta regency administration in West Java to revoke the permit of a stone mining company that recently blew up a cliff, causing large fragments to fall on residents’ houses.

The incident happened on Tuesday in the regency’s Sukamulya village, Tegalwaru district, when stone miner PT Mandiri Sejahtera Sentra (MSS) set off an explosion on a 500-meter cliff in Cihandeuleum hamlet. The resulting falling rocks and boulders severely damaged seven houses and one school building.

Purwakarta Disaster Mitigation and Fire and Rescue Agency head Wahyu Wibisono said that at least 68 families had been affected by the incident.

Dedi said accused the mining company of being reckless as it had failed to take into account the cliff’s surroundings.

“Fortunately, no one was home at the time. If there had been people in those houses, there would have been casualties,” Dedi said as quoted by kompas.com on Wednesday.

The Golkar politician said the mining company’s permit had been issued by the West Java administration with a recommendation from local authorities.

Therefore, Dedi urged the Purwakarta Environmental Agency to revoke the miner’s environmental management scheme and environmental monitoring scheme (UKL-UPL) recommendations, which were requirements for a permit.

“We don’t need an evaluation; just close the mine,” Dedi said.

The incident serves as a reminder for other big mining companies in West Java to consider the consequences of their actions, he added