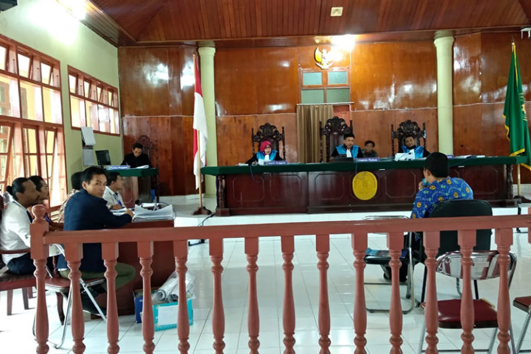 BENGKULU, Indonesia — Hearings in a lawsuit filed by residents over a newly built Chinese-funded coal-fired power plant in Sumatra have revealed a litany of irregularities behind the permit that allowed it to go ahead.

Fishing communities and other locals living in Sepang Bay in the province of Bengkulu have sued the provincial government for issuing an environmental permit for the $360 million plant, which they say would pollute and destroy the environment once it goes online, and rob fishers and farmers of their livelihoods. The plant’s construction was funded largely through a $270 million loan from Industrial & Commercial Bank of China (ICBC) and the Export-Import Bank of China.

The plaintiffs’ main argument is that the 200 megawatt plant should never have been allowed to be built because of irregularities in the environmental impact assessment, or Amdal, that the developer was required to carry out in order to proceed with the project.

The Amdal document submitted by plant operator PowerTenaga Listrik Bengkulu (TLB) — a joint venture between China’s state-owned PowerChina (which holds a 70 percent stake) and Indonesia’s PT Intraco Penta (30 percent) — stated that 92 percent of residents in the area affected had agreed to the project, while the remaining 8 percent were unsure of it. The implication was that there was no local opposition to the project.

But the claim wasn’t backed by any detailed data or polling methodology, and the reality on the ground is that there has been plenty of criticism of the plant.

Locals have expressed their opposition to the project since construction began in 2016. That year, 429 residents of Sepang Bay signed a petition rejecting the coal plant and delivered it to the Bengkulu governor, Ridwan Mukti, who was a staunch supporter of the project. (Ridwan and his wife were later arrested in a separate corruption case; in January 2018 they were convicted and sentenced to eight years in prison for taking Rp 1 billion, or about $71,000, in bribes from a company to award it the contracts for two road development projects in the province.)

Ridwan said at the time that the coal power project was part of President Joko Widodo’s ambitious target to add 35,000 megawatts of generating capacity to the national grid. In October 2016, residents blocked the road to the groundbreaking ceremony for the project, which Ridwan attended.

Numerous protests later, and after Ridwan’s jailing, the residents filed suit against the provincial government on June 20 this year, seeking to have the project’s environmental permit revoked.

The plaintiffs also allege that the project violates provincial and municipal zoning regulations issued in 2012. The municipal regulations don’t include any plan to build a coal-fired power plant, while the provincial regulations allow for a coal plant to be built in in an area 80 kilometers (50 miles) away from the current site.

The provincial government’s environment and forestry department, which was responsible for vetting the Amdal at the center of the lawsuit, said the project didn’t violate the zoning regulations because the department had already received a recommendation letter from the provincial development agency, Bappeda.

Not so, said Ali Akbar, the director of Kanopi Bengkulu, an NGO that’s assisting the residents in their lawsuit.

“On May 3, 2016, the head of the Bappeda issued a letter,” he said. “After [we] analyzed [it], the content [of the letter] didn’t support the Sepang Bay coal power plant project. Instead, [the letter] explained the importance of developing renewable energy in Bengkulu province.”

This point was also flagged by Gunggung Senoaji, a member of the technical team tasked with evaluating the Amdal at the environment and forestry department. Gunggung, a forestry lecturer at the University of Bengkulu, said he brought up early on the fact that the project violated the zoning regulations and that it was necessary to address this issue before signing off on the Amdal.

“Almost all [members of] the technical team from the University of Bengkulu voiced their objections on the location discrepancy between the project and the spatial plans,” he told the court as a witness for the plaintiffs.

Gunggung added that he had recommended seeking advice from the Ministry of Environment and Forestry. But after raising his objections, Gunggung said, he was never invited again to discuss the environmental impact analysis.

“So we don’t know the end result of the committee that evaluated the environmental impact analysis,” he added.

The National Ombudsman has also sided with the protesters on this point, issuing a letter on Sept. 25 concluding that there had been maladministration by both Bappeda and the provincial environment and forestry office in approving the developer’s Amdal and issuing the environmental permit. However, it stopped short of calling for the permit to be revoked, saying instead that the zoning regulations should be adapted to accommodate the plant’s presence.

A fisherman in a boat at Sepang Bay in Bengkulu, Indonesia, where a coal plant is being constructed. Image by Ahmad Supardi/Mongabay Indonesia.

Another problem that critics say should have halted the issuance of the environmental permit is one that’s common across Indonesia: the plaintiffs claim the power plant is located in a disaster-prone zone that’s susceptible to earthquakes and tsunamis.

Kanopi Bengkulu notes that Sepang Bay is among 8,043 regions in Indonesia identified by the National Disaster Mitigation Agency (BNPB) as being at high risk of getting hit by a tsunami. This region along the southwest coast of Sumatra has been hit by devastating earthquakes and tsunamis in the past. Yet despite this, the environmental impact assessment for the power plant makes no mention of an action plan in the event of an earthquake and/or tsunami, according to Kanopi Bengkulu’s Ali.

The construction of the power plant may also have exacerbated the location’s vulnerability to a tsunami. The construction called for the clearing of 10 hectares (25 acres) of mangrove forest in Sepang Bay. Studies have shown that mangrove forests protects coastal areas by serving as protective barriers against tsunami waves.

The mangroves also served a more immediate need for the local community, hosting marine life that fishers depend on for their livelihoods. In the latest hearing of the lawsuit, on Oct. 22, local fisherman Aung testified that the project had made it impossible for him to catch crabs.

“Ever since the mangrove forest was destroyed, our livelihoods had disappeared as well because the forest was our base to catch crabs,” he told the court.

He said now sold food by the roadside to support his wife and two children, while other fishermen he knew had moved away from in search of better fishing areas.

A black liquid effluent from the Sepang Bay coal plant’s treatment facility, believed to be toxic. Image by Yozi/Mongabay Indonesia.

In addition to hearing from residents and expert witnesses, the court also organized a trip to the project location on Oct. 10 to assess the impact of the plant, which has been operating on a trial run since August.

However, the delegation of judges and lawyers were blocked from entering the project site by the operator’s security team. But even from outside the area, at least one of the judges noted the smell from a nearby water treatment plant serving the power station. Kanopi Bengkulu said it had carried out tests of the liquid effluent from the treatment plant and believed it to be toxic.

Jalaluddin, a resident whose farm is located near the power station and treatment plant, said he was worried about the impact of continued operation of those facilities. “We’re hoping the environmental permit is revoked,” he said.

Lawyers for the provincial government say the residents’ complaints blaming the power plant for polluting the air and water are misplaced. They note that Sepang Bay is home to a bustling port that also serves coal and palm oil companies, and that the constant handling of large volumes of these commodities is what contributes to the local pollution.

“There are stockpiles of coal and palm kernel shells, and the high level of activity makes it very likely that dust will spread,” said Abdusy Syakir, a lawyer for the government.

This story was first reported by Mongabay’s Indonesia team and published here on our Indonesian site on Oct. 16, 2019.